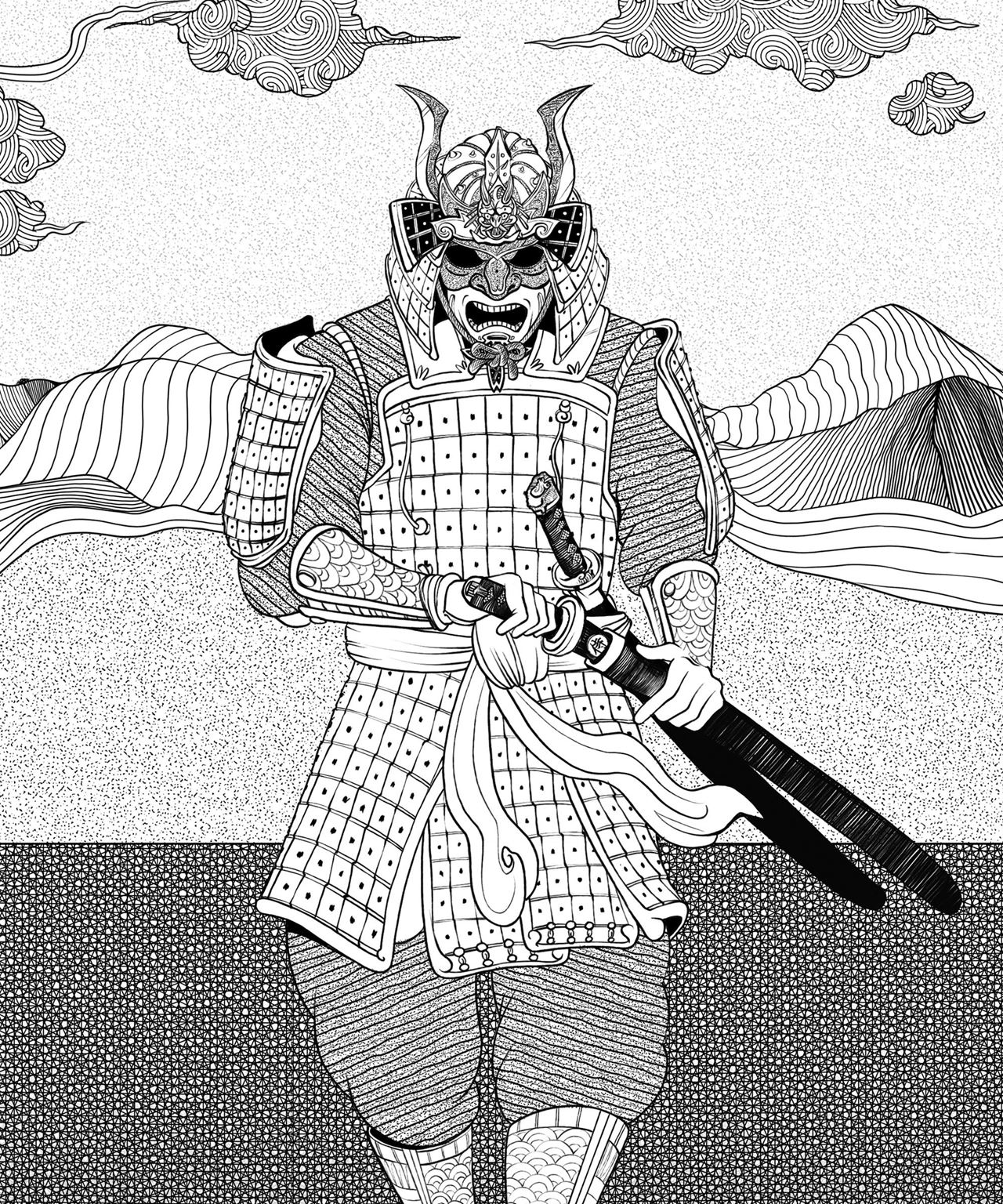 Earth, water, fire, wind and void – based on the five Zen rings, Miyamoto Musashi describes strategies for the perfect samurai in 1645. The decisive factor is not his technique, but his inner attitude characterised by relaxation, openness and wisdom of the heart.

Founded in the 18th century, by the middle of the 19th century Faber had grown to become the largest manufacturer of wood-cased blacklead and colour pencils. Baron Lothar von Faber turned the humble pencil into the world’s first brandname writing implement and created a series of fascinating products that remain classics to this day. When his granddaughter Baroness Ottilie von Faber married Count Alexander zu Castell-Rüdenhausen in 1898, the King of Bavaria gave his approval to the new name Faber-Castell. Our approach to our business, then and now, is based on an unerring awareness of quality, pioneering drive, and social commitment.

Miyamoto Musashi
Miyamoto Musashi (1582–1645), who the Japanese consider to be the greatest swordsman of all time and a perfect samurai, is said to have been impetuously furious. He wrote The Book of Five Rings, which serves as a source of worldly wisdoms to this day. 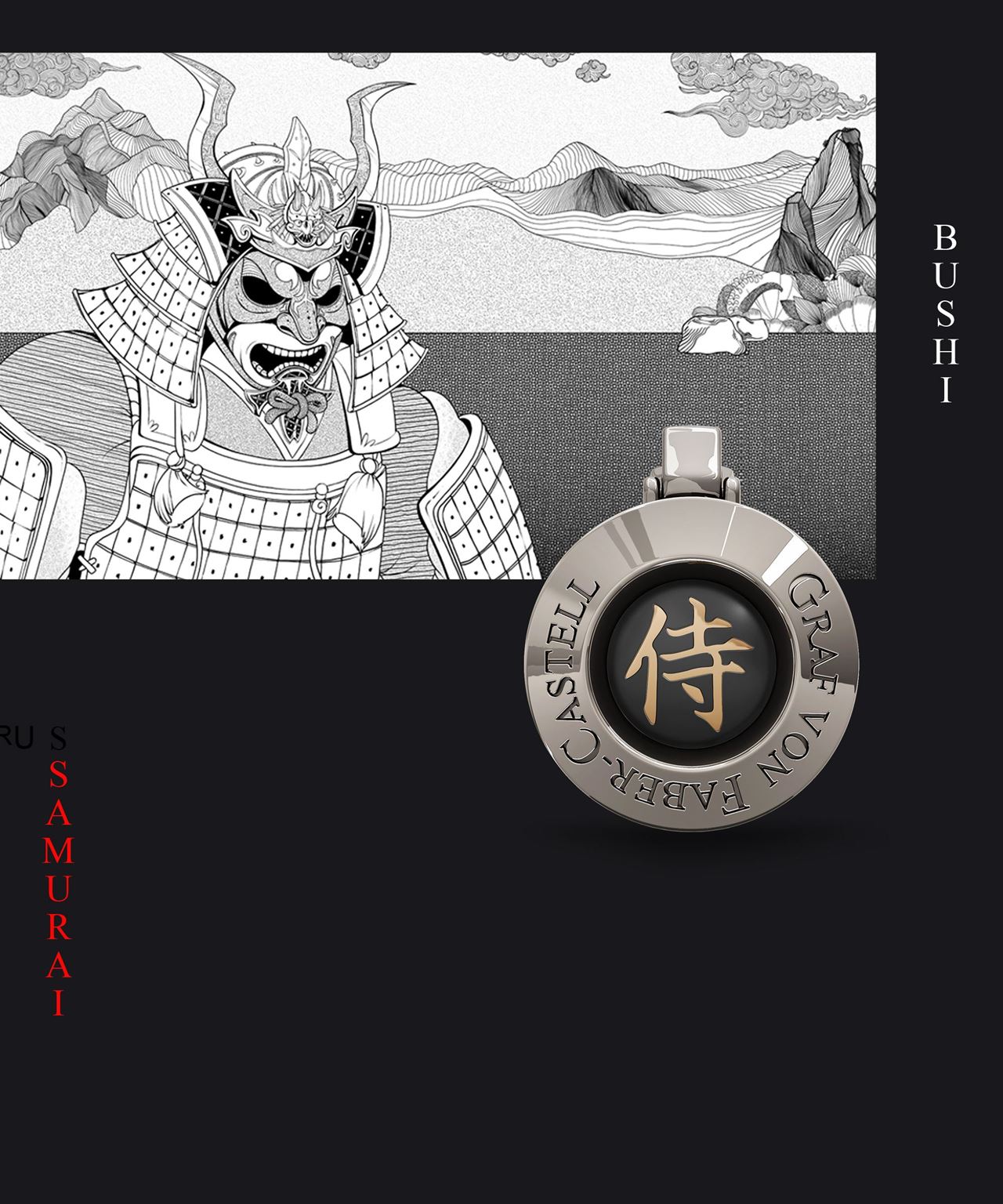 Since its first edition in 2003, the Pen of the Year has gained a special status among connoisseurs of fine writing culture. Each limited edition tells the tales of epochs and peoples whose deeds shaped the history of humanity. The Pen of the Year 2019 is inspired by the Japanese samurai (bushi) and their matchless martial arts skills, their swords made from the most precious materials and their silently gliding movements, the aesthetics of which are so similar to the writing process. From the late 12th century, the warrior caste became political leaders and reigned over the land and people in Japan until the abolition of feudalism. In 1867, their era came to an end when the emperor banned the wearing of the traditional clothing. Although the samurai had been stripped of all privileges, the myth surrounding the brave swordsmen, who were even more powerful than the emperor at times, remains to this day.

The legendary samurai of the Far East went into battle wearing terrifying masks. Values such as courage, toughness, heroism and honour defined their lifestyle as well as their tradition and the extraordinary beauty of their weapons.. 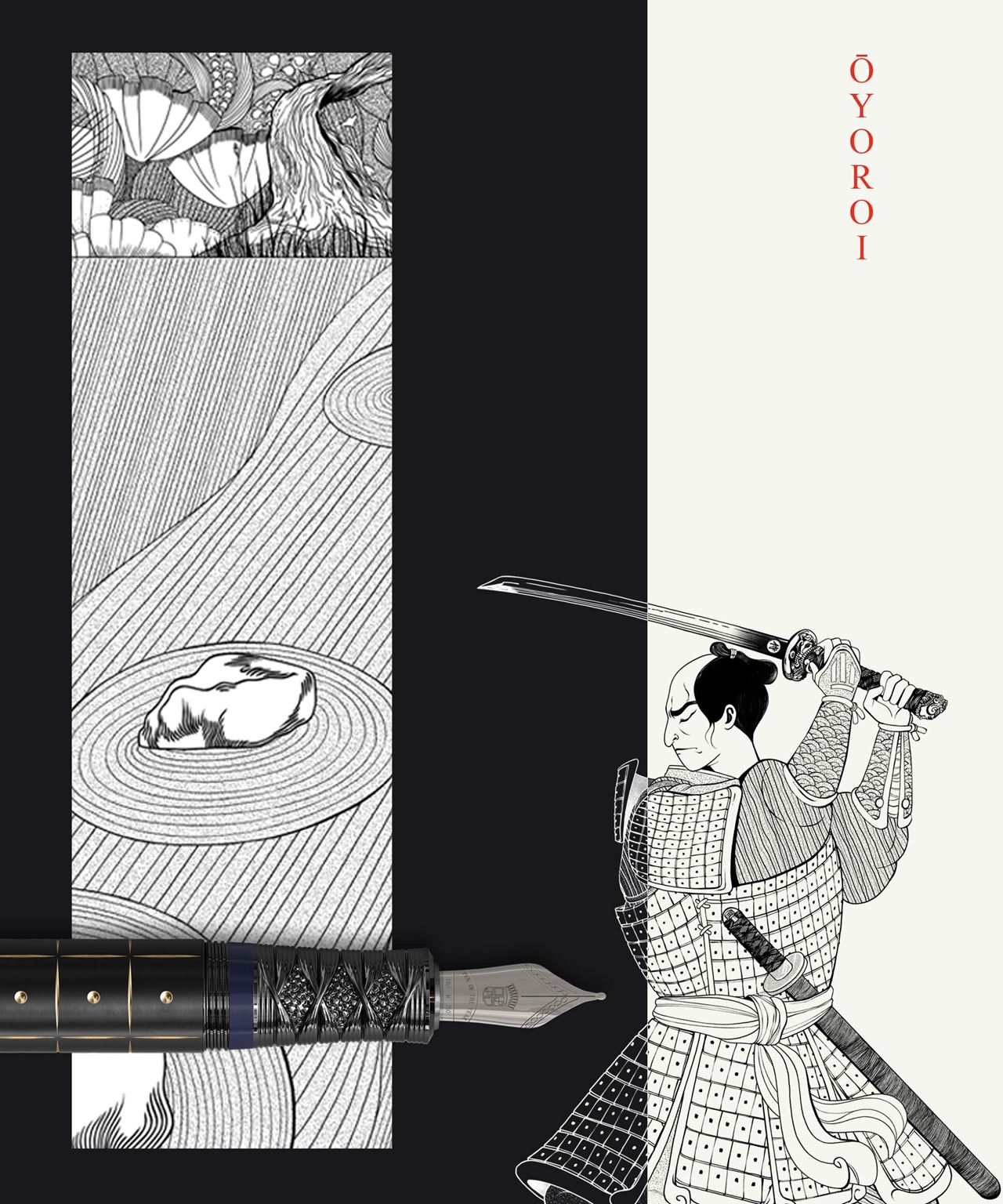 THE BOOK OF EARTH

Following their chosen path with discipline will lead the samurai to their desired physique and mentality.

Always giving it their all with abundant vigour and loyalty is what defines the spirit of the samurai. Designed to fit his body and crafted with extreme precision, the armour (o-yoroi) offered the warrior the greatest possible freedom in handling his weapons. The painted black metal barrel of the Black Edition resembles the beautifully decorated armour made from individual metal plates. Delicate, tapered lines with 24-carat-gold plating make the embellishment appear slightly embossed. They are made with high precision, and every shaft is unique.

Self-discipline – an important value of the samurai – is closely associated with the philosophy of the Zen rock garden. 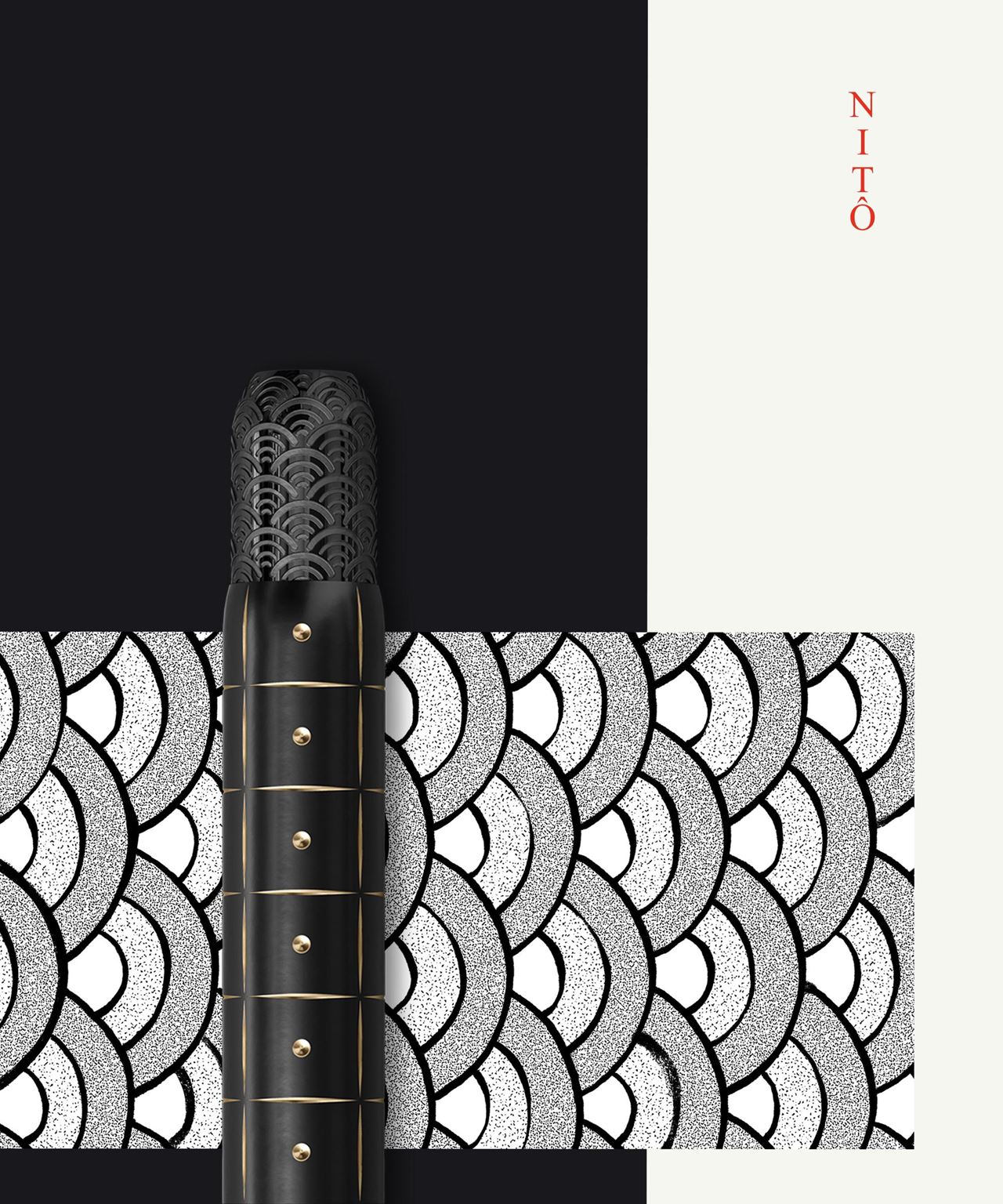 THE BOOK OF WATER

The samurai's precise and flowing movements during sword fighting are vitally important, as described in the Book of Water. The characteristics of water – its ability to adapt, its clarity and its transparency – lie at the heart of the spiritual struggle.

In the words of Miyamoto Musashi: “In everything you do, it comes down to the right time and the right rhythm”. Learning flowing sequences of motion to perfection was part of his Nitô swordsmanship school. With outstanding craftsmanship, an even, wave-like pattern is lasered onto the end cap of the Black Edition, reminiscent of the smoothness and harmony of water. Because as Musashi said: there is rhythm in everything, even the intangible.

Steady, calm movements are symbolised by the wave pattern typical of Japan. 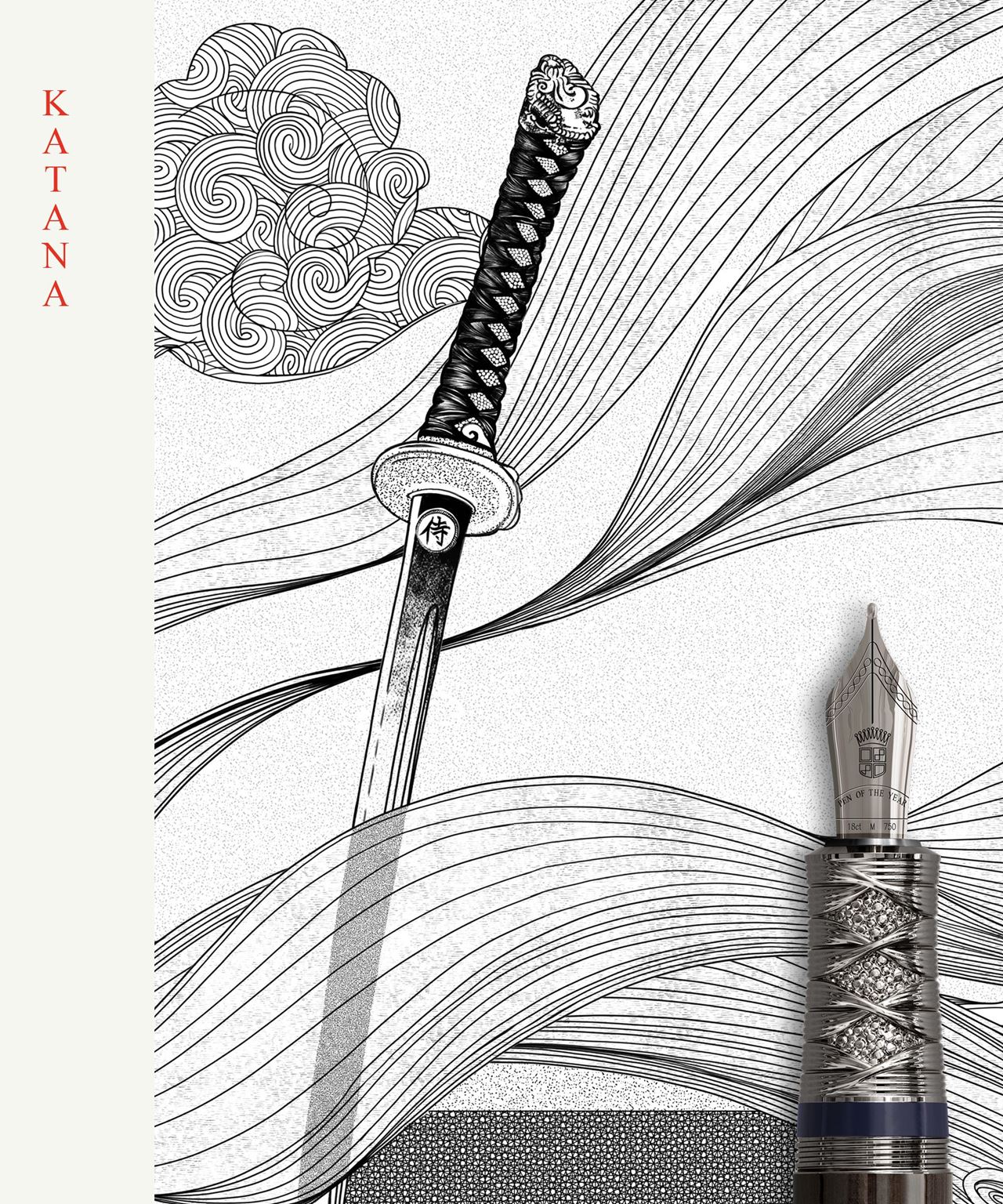 THE BOOK OF FIRE

Consistent repetitions of the craft give way to the internal harmony and calm used to defeat the enemy in battle. The mastery of the precious, elaborately crafted swords is what counts.

The traditional process employed by Japanese forges to make their long swords (katanas) sharp and robust was very complex. The blades were formed from tamahagane steel, while the sword’s sheath and handle were made of untreated magnolia wood. The handle and sheath were covered with prized stingray leather and decorated with artistic inlays to achieve the perfect finish. The production, materials and the look and feel of the Pen of the Year are inspired by these masterpieces. The barrel, made of stained magnolia wood, is painted, sanded and polished multiple times. It is adorned with a handmade engraving with a 24-carat-gold finish, which makes the writing instrument one of a kind.

The design of the hand-forged handle is reminiscent of the mysterious beauty of the stingray leather the samurai used to cover their swords’ handles. This makes every writing instrument unique. 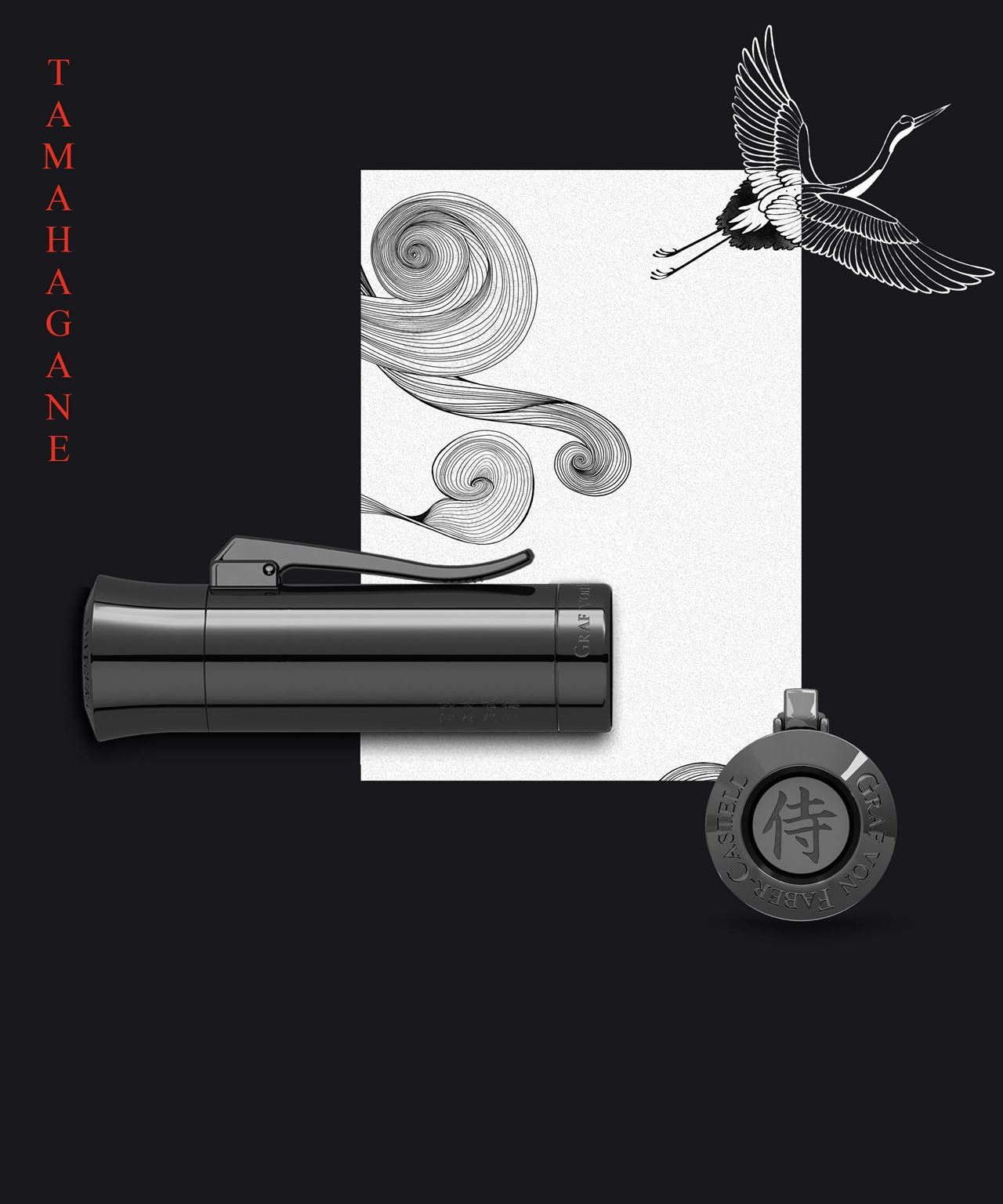 THE BOOK OF WIND

“It is difficult to know yourself if you do not know the others” is written in the Book of Wind.

The samurai expressed their grace and dignity with their magnificent swords. Every detail of the weapons reflected their endeavour for resolution and unquestionable authority. Tamahagane is the name of the hard steel that they used to forge their blades. As an elegant detail on the cap of the Black Edition, the tamahagane steel inlay made by a Japanese master of the art of forgery represents perfection and tradition. It contains an engraving of the Japanese character for “samurai”.

The detail made from genuine tamahagane steel, adorned with an engraving of the Japanese character for “samurai” on the cap of the Black Edition, adds a sophisticated touch. 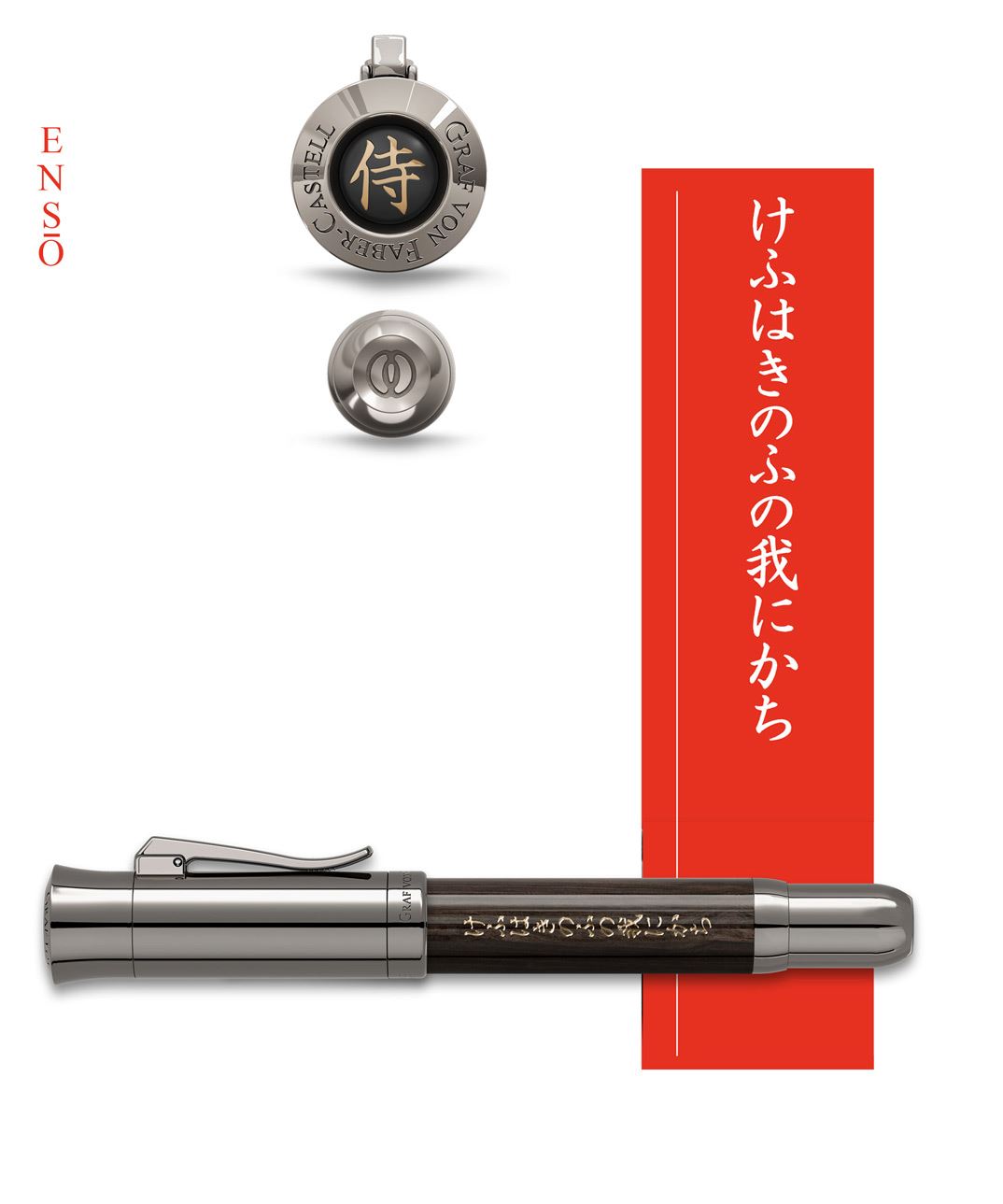 THE BOOK OF VOID

The Book of Void describes how to venture down the path of truth, by following one’s nature and intuition.

Samurais believe that intuition is just as important as the intellectual learning of the rules so that they can be free of selfishness and wrong intentions. In line with this tenet, the darkstained barrel made of magnolia wood features a quote engraved in 24-carat-gold varnish by Miyamoto Musashi, “Today I win against myself of yesterday”. The end cap is also engraved with the symbol created by Musashi for the word “tsuba”, or hand guard, the device that protects the hand when holding the weapon. The two caps, the handle and the 18-carat-gold nib of the fountain pen, available as part of a 400-piece limited edition release, are coated in ruthenium. Only 120 of this rollerball pen edition are available to purchase.

Ensō refers to the hand-drawn circle used in a meditation technique. It stands for strength, elegance, the universe and the void. 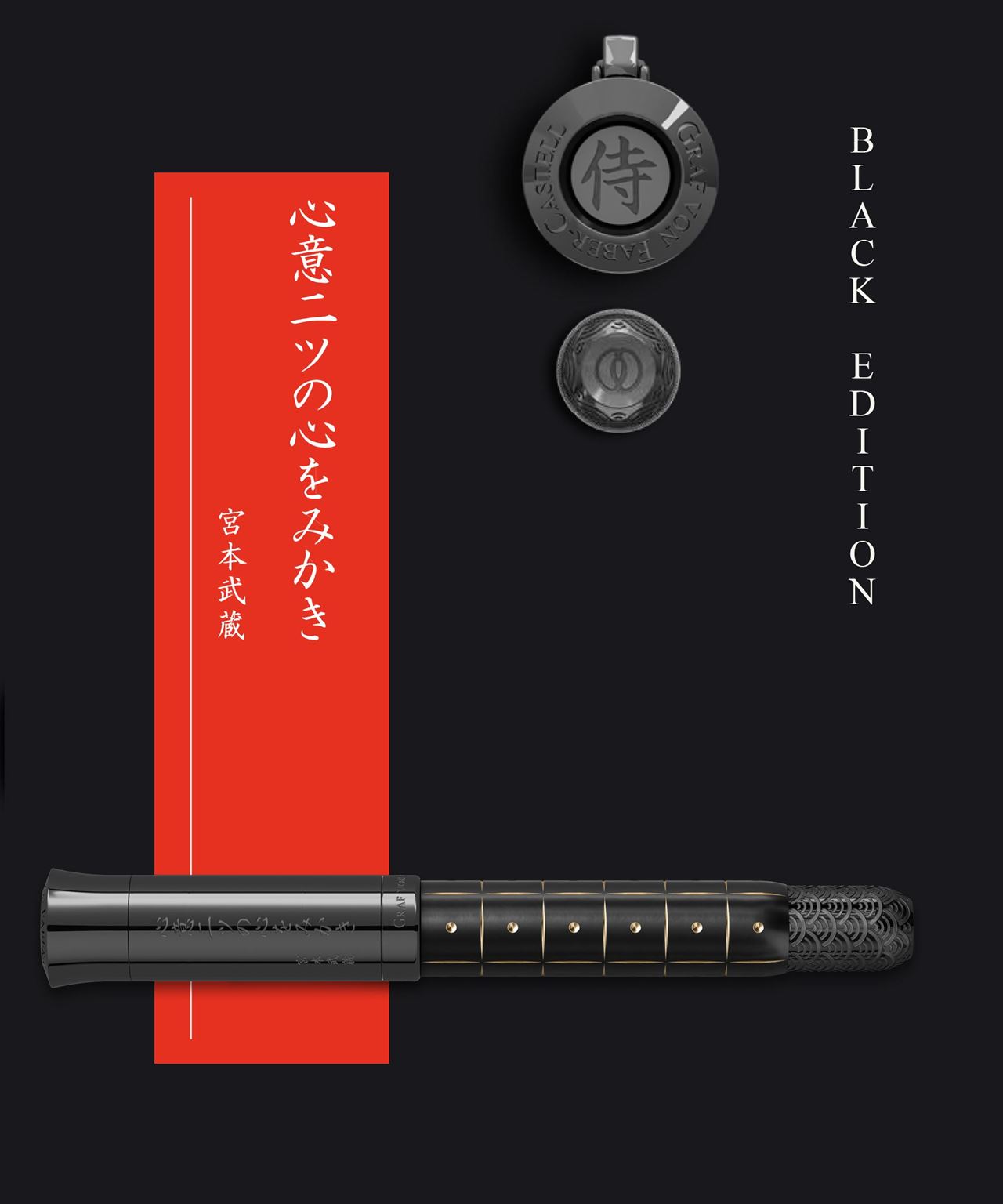 CULTIVATE BOTH - YOUR SPIRIT AND WISDOM

“Cultivate both – your spirit and wisdom” is the quote by Miyamoto Musashi on the Black Edition of the Pen of the Year 2019. As a tribute to the noble virtues of the samurai and their art of forgery, the Black Edition writing instruments are made from only the finest of materials.
The Japanese character for samurai is engraved in the tamahagane inlay in the cap. The end cap is adorned with the symbol “tsuba” (hand guard), designed by Miyamoto Musashi. The caps and the handle are finished with an anthracite-grey PVD coating made from titanium, while the 18-carat-gold nib is coated with ruthenium. Each of the unique, numbered pens in this edition, limited to 330 fountain pens and 100 rollerball pens, represents the inner disposition of the samurai to strive for strength, clarity and perfection. The exclusive pens come in a highgloss black wooden case. A certificate signed by Count Charles von Faber-Castell attests to the authenticity of the limited edition.

The exclusive pens come in a highgloss black wooden case. A certificate signed by Count Charles von Faber-Castell attests to the authenticity of the limited edition. 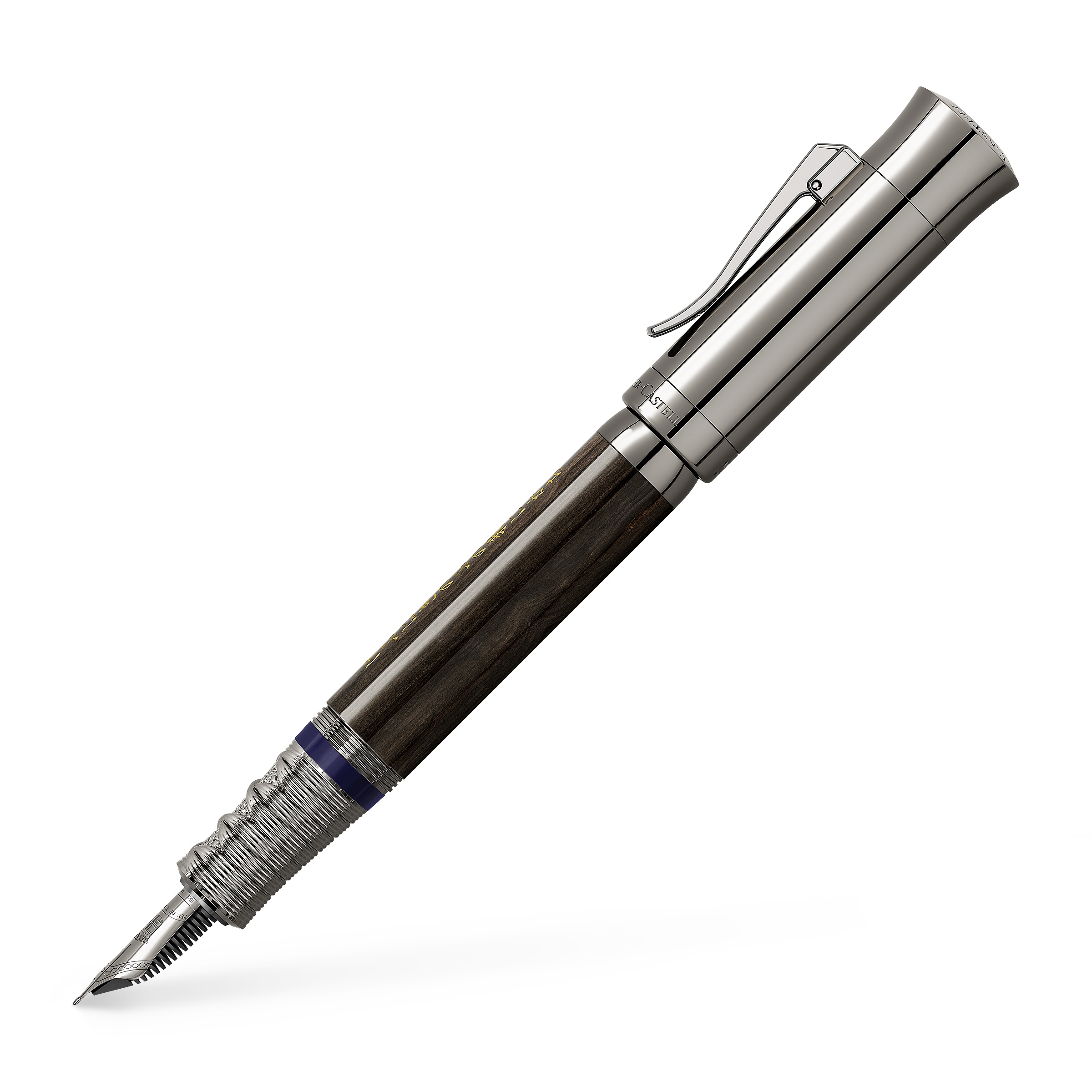 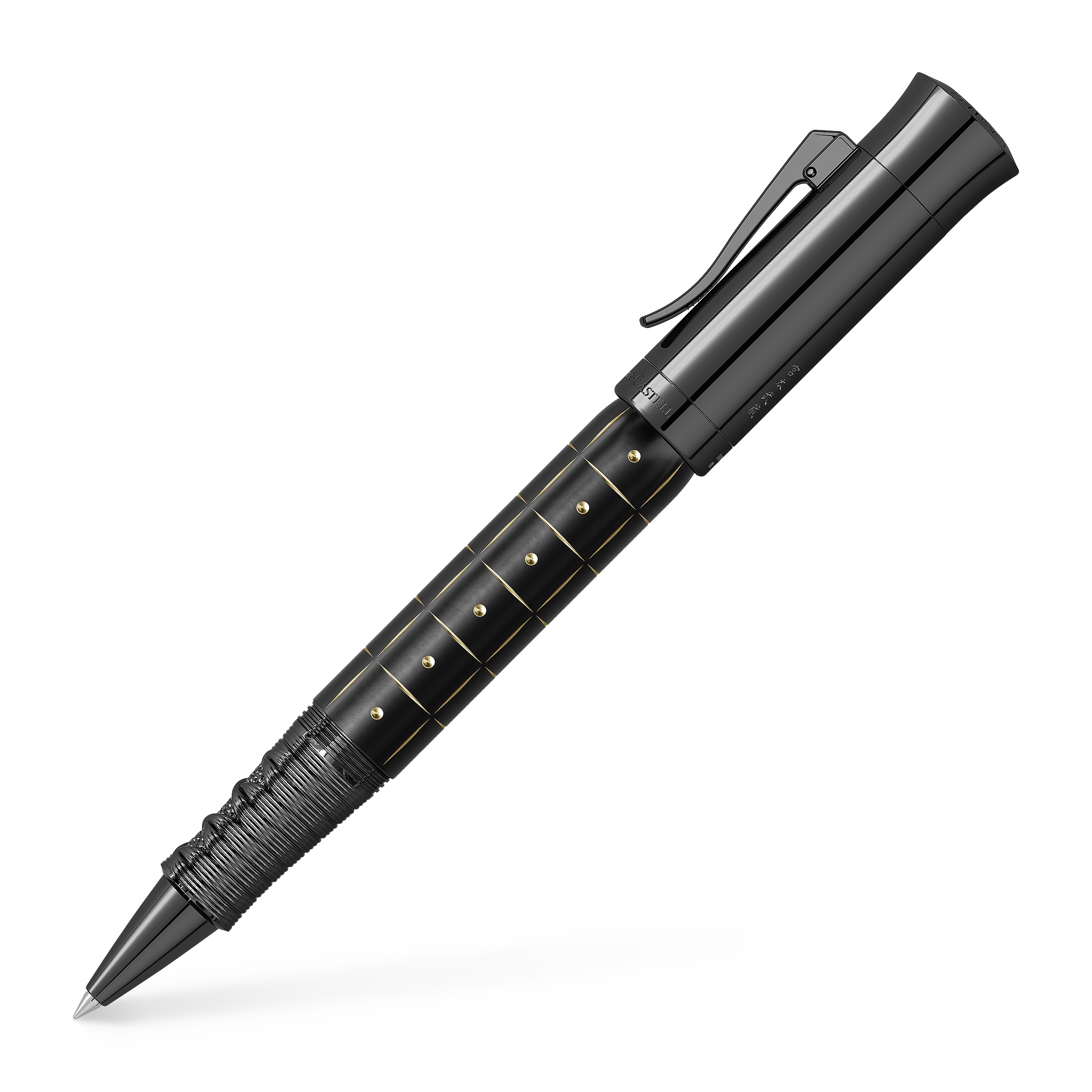 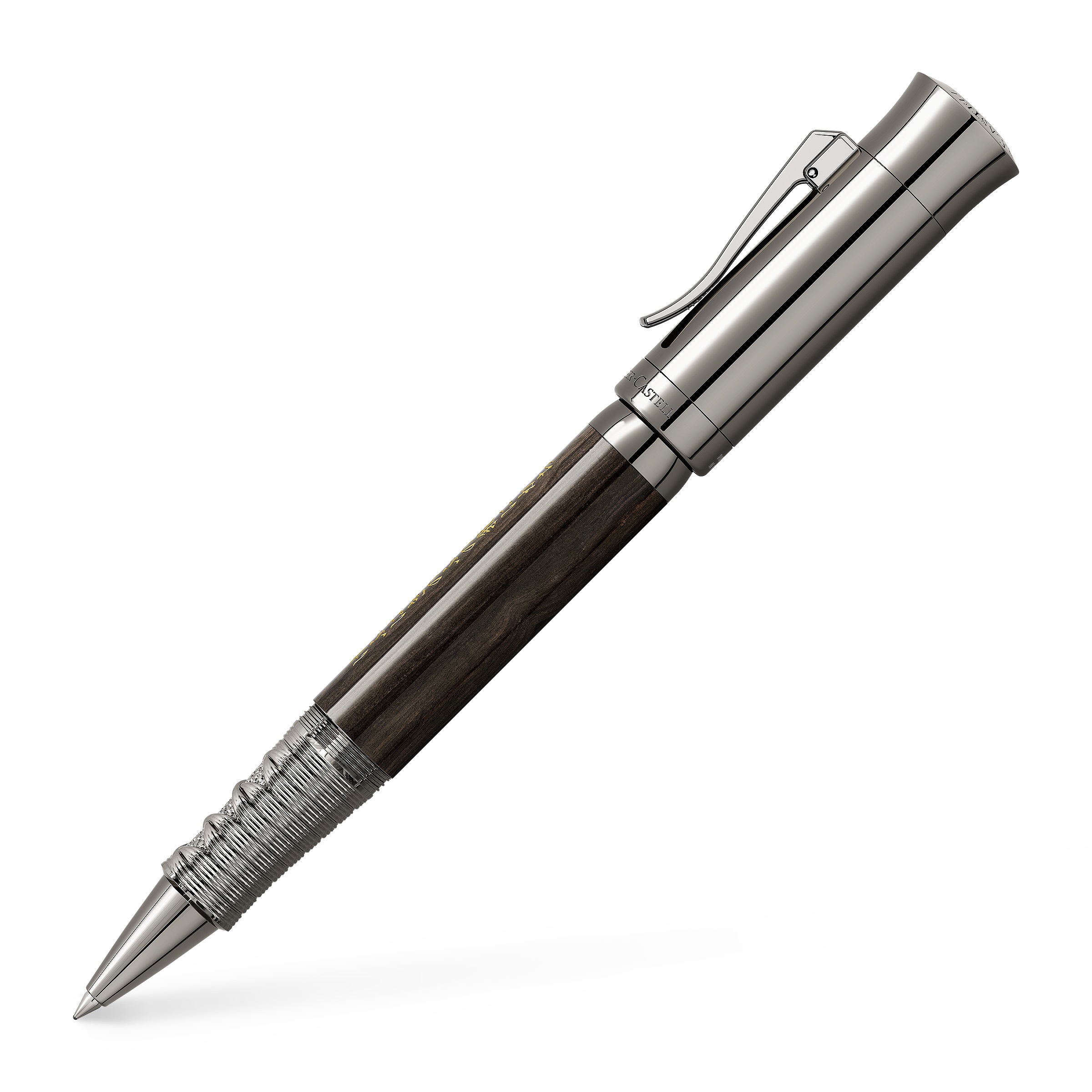 Many of our Fountain Pens are run in by Hand.

Cart (0)
Total £0.00
including VAT and shipping costs
View Basket
We use cookies in order to guarantee the highest quality. If you continue browsing the site, you agree to the Data Privacy Policy.
Close