The Graf von Faber-Castell collection has carved out a special position for itself with connoisseurs of fine writing culture due to its meticulous craftsmanship and carefully chosen materials. The high point of the collection has been the sumptuous Pen of the Year edition since 2003. The exclusive writing instruments are limited editions, elaborately showcasing fine materials. These elegant productions are inspired by the historic works of major designers and personalities. The new Pen of the Year edition focuses on these “pillars of history” and the fascination that they engender to this very day. 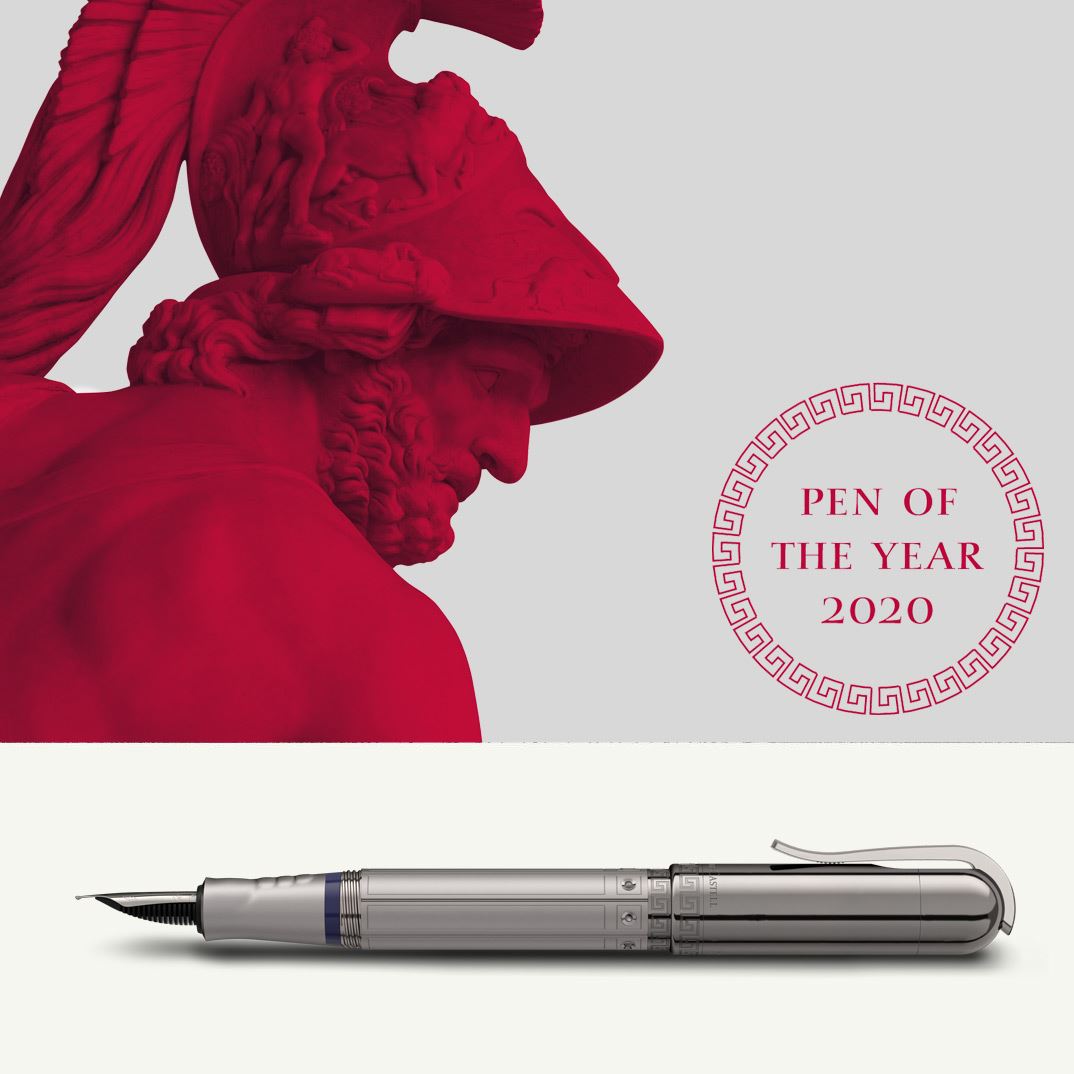 The Pen of the Year 2020 is inspired by the Greek heroes of Sparta and their king Leonidas. For centuries, the small province of Sparta was the strongest military power in ancient Greece. The Spartiates’ discipline and superiority are legendary, acquired in their strict education from childhood onwards: the Agoge – meaning “leading, guidance, training”. Spartan society was moulded by the military, their fate determined by the gods: the courageous Athena was considered the most important deity alongside Apollo and Artemis. She stood for wisdom, strategy and combat and was also revered as the “guardian of the city”.

The Pen of the Year 2019 is inspired by the Japanese samurai (bushi) and their matchless martial arts skills, their swords made from the most precious materials and their silently gliding movements, the aesthetics of which are so similar to the writing process. From the late 12th century, the warrior caste became political leaders and reigned over the land and people in Japan until the abolition of feudalism. 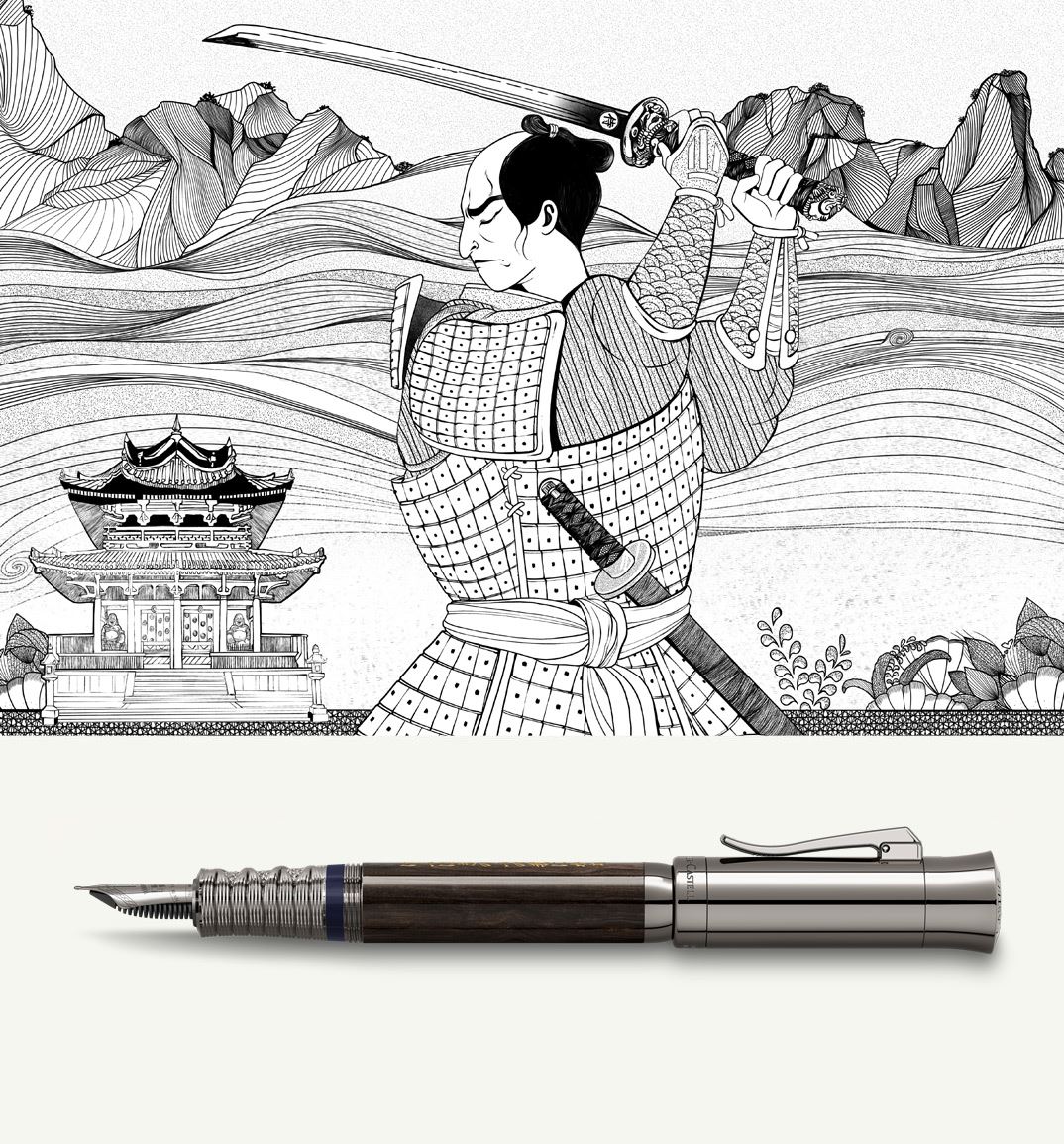 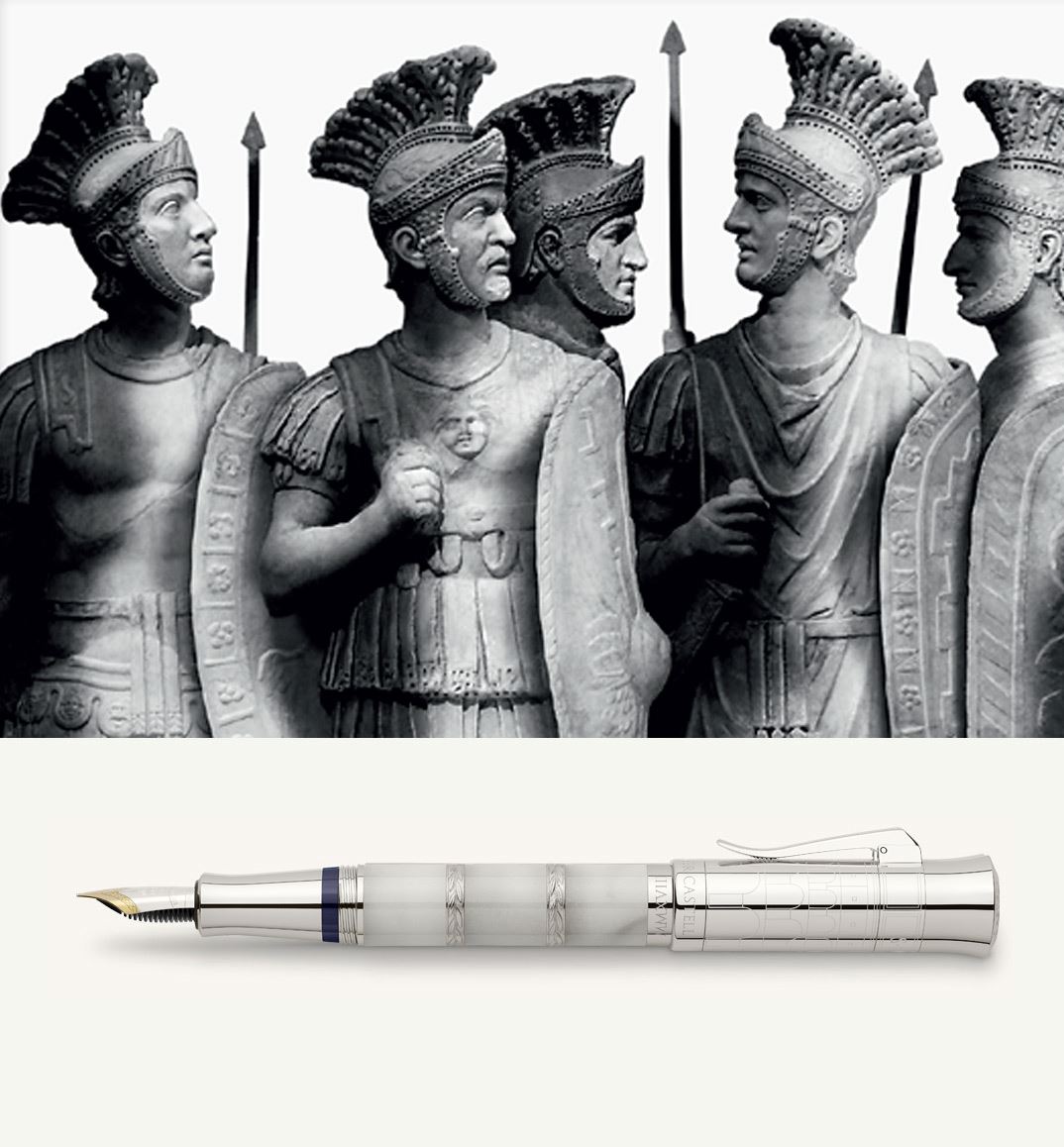 This year it centres on an empire that, step by step from the 8th century BC, extended over three continents: Europe, Africa, and Asia. Even today, in the early 3rd millennium, it still exerts immeasurable influence on our world: the Imperium Romanum.

Admired as daring masters of wind and wave, feared as ruthless invaders and valued as merchants, the Vikings set up a trading network that span across continents. The revolutionary and pioneering construction of the Nordic longboats, the mystic force of the runes and the curly birch as one of the characteristic trees of the Nordic world inspired us in designing the Pen of the Year 2017. The platinum-plated barrel is reminiscent of the elegant curves of those renowned boats; finished with masterly craftsmanship in the spirit of the epoch-making skill of the Vikings. With great precision, slivers of ‘curly’ birch are integrated. A special process has made it possible to cut such thin pieces from this wood, which is very delicate on account of its attractive patterning. The version with a tough anthracite-coloured PVD coating has a particularly masculine appeal. Matt-grey smoked oak – the preferred wood for building the Viking ships – stands in exciting contrast to the gleaming metal parts of fountain pen and roller-ball pen, which change their appearance with every movement. Both editions come with an 18-carat gold nib that is run in by hand. An end-cap protects the rotary knob of the plunger mechanism of the plunger-type fountain pen. 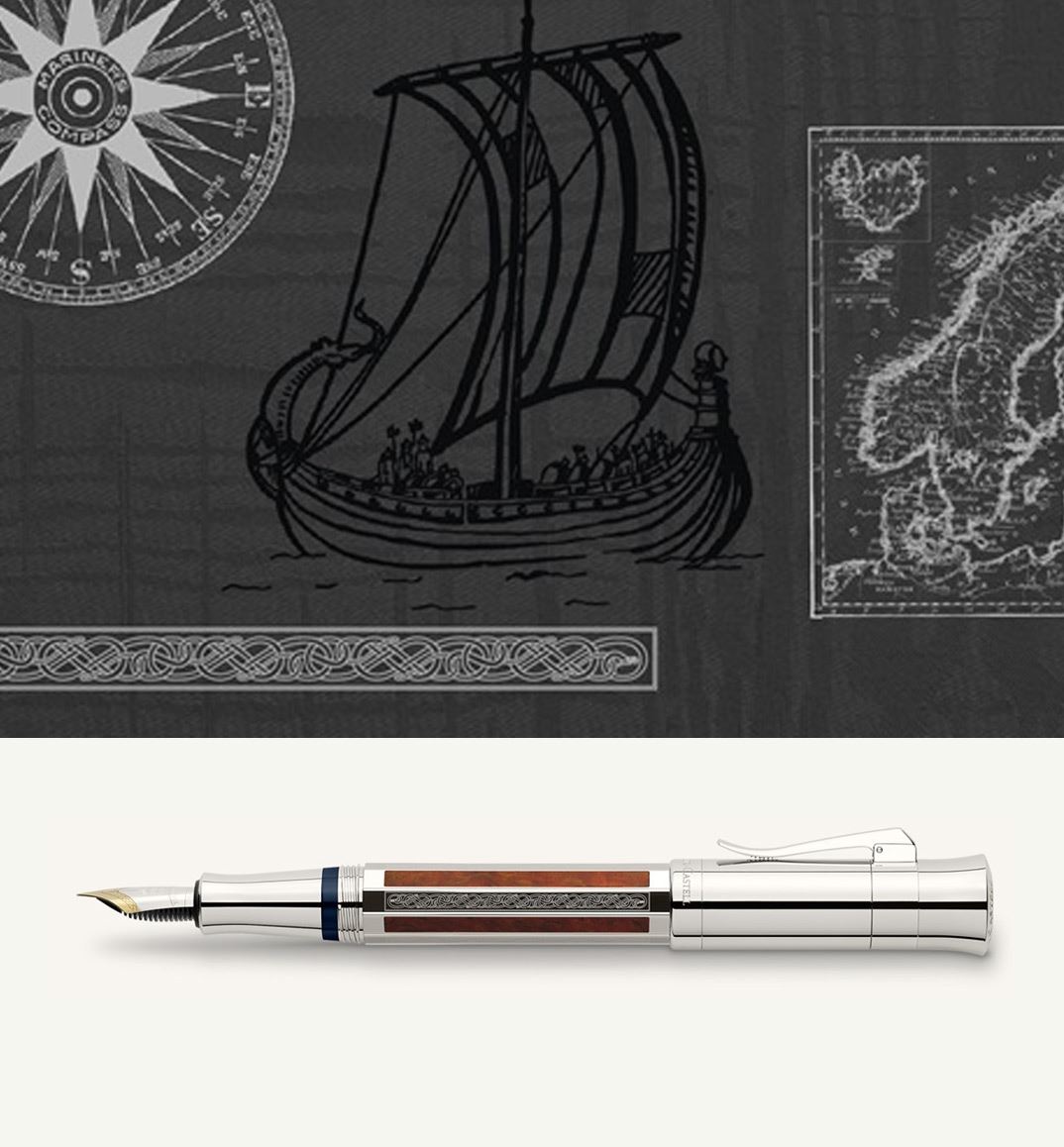 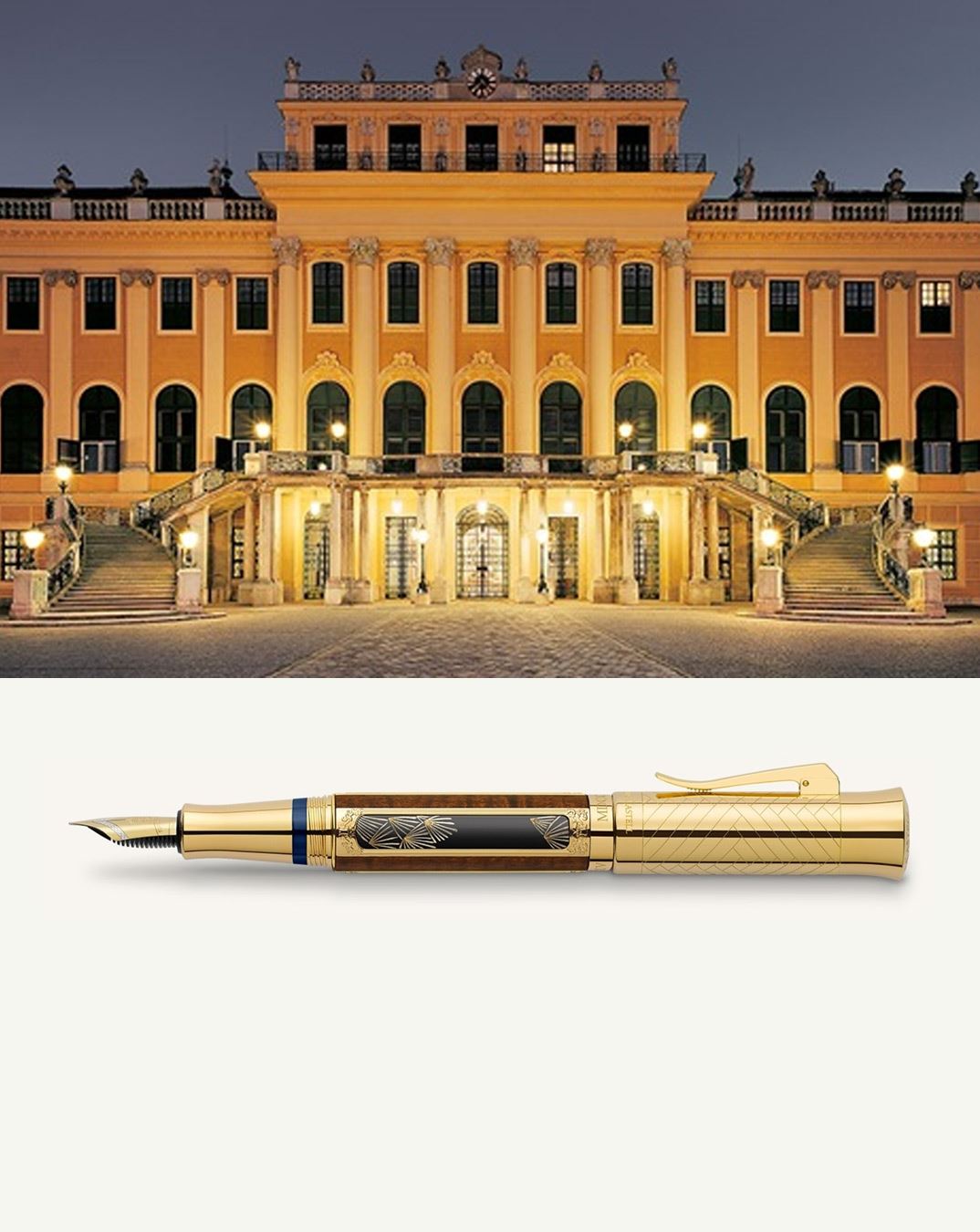 Black, masterly-painted lacquer panels placed in panelling made from flamed maple and set with a gilded frame have adorned the Vieux-Laque Room in Schönbrunn Palace since 1770. Here you will find a special expression of the deep love between Maria Theresa and Francis Stephen in craftsmanship perfected over thousands of years – lacquer art. This story is the inspiration for the Pen of the Year, available in both a gold-plated and platinum-plated version. We were very pleased to have acquired true artists of their craft for the design work of the “Pen of the Year 2016”: the conservator of the Vieux-Laque Room Silvia Miklin and the Japanese artist Tomizo Saratani who specialises in the Maki-e technique. For the Special Limited Edition we have developed a motif that is divided into three parts, yet comes together to make a whole. During the most time consuming phases, each of the three plates is ﬁrst painted black, then polished and burnt several times by hand. Then the artist lovingly draws the motif on the lacquer and sprinkles the still wet drawing several times with 24-carat gold powder in diﬀerent tints. This results in a relief that can still be perceived through additional protective lacquer works. The platinum-plated variant of the “Pen of the Year 2016” is also inspired by the design of the Vieux-Laque Room in a unique way. Hand-ground plates made from deep black onyx are set in elaborately created, platinum-plated frames and contrast with individually grained flamed maple in a fascinating manner.

After his victory in the Seven Years’ War Frederick was hailed as a military genius and henceforth called “the Great”. As a sign of his success he ordered the construction of his largest and most ambitious building: the New Palace of Sanssouci. Precious decorative natural stones played a special role in this splendour, something Prussia had in abundance thanks to the conquest of Silesia: wall coverings made from multi-coloured marble, floors inlaid with jasper, amethyst and serpentine.
Magnificent ballrooms, impressive galleries, a baroque palace theatre – the interiors of the New Palace are unparalleled in Europe! Their fascinating architecture was the inspiration for the creation of the “Sanssouci, Potsdam” Pen of the Year. The platinum-plated barrel and cap are adorned by four green Silesian serpentines and a Russian smoky quartz – both ground and polished by hand. The Special Edition combines 24-carat gold plating with green serpentine and rare chrysoprase, Frederick’s favourite natural stone. Both editions come with an 18-carat, bicolour gold nib that is ‘run in’ by hand. An end-cap protects the rotary knob of the plunger mechanism of the plunger-type fountain pen. 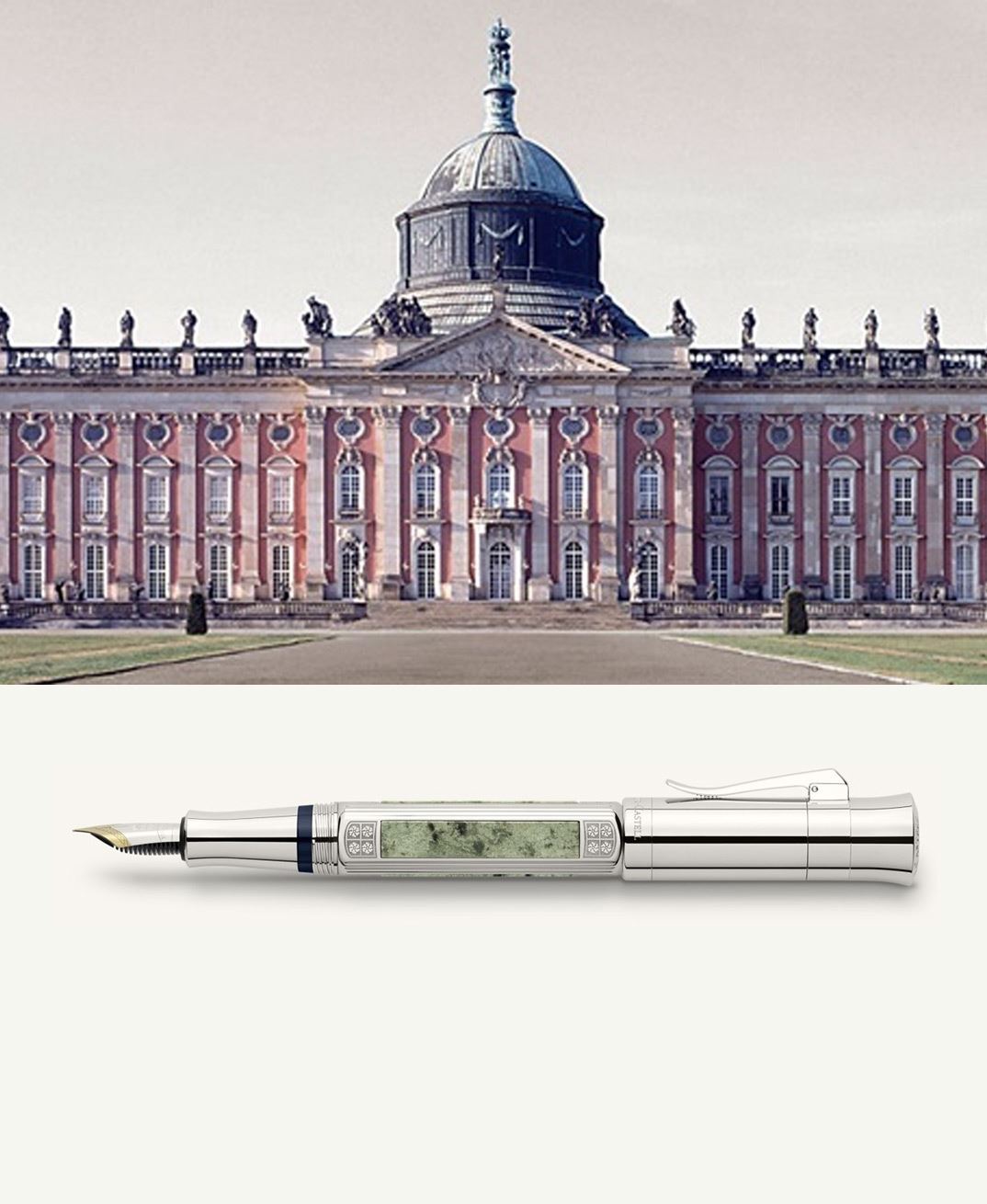 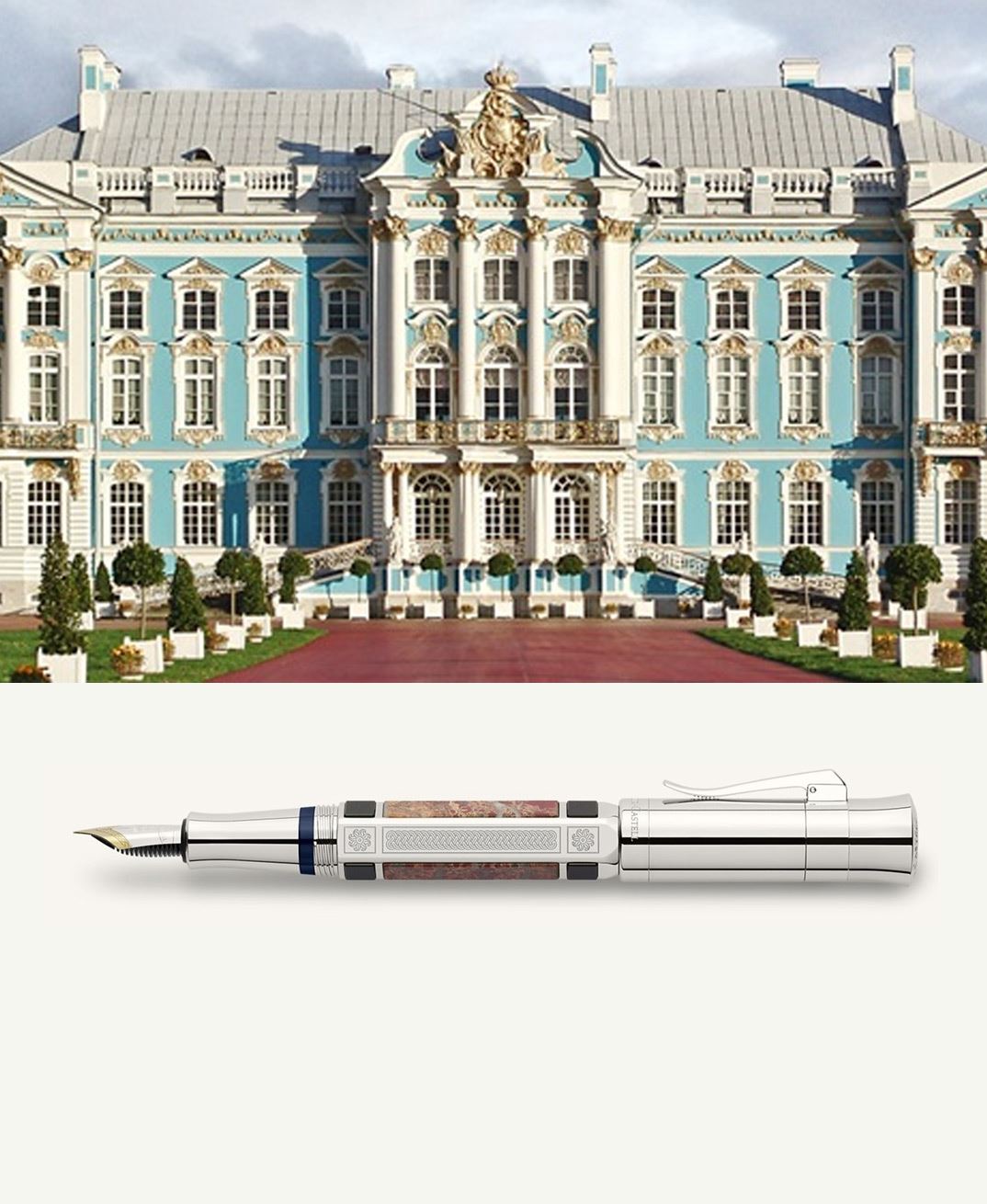 Paying homage to the Agate Rooms, the “Catherine Palace” Pen of the Year brings the lustre and aesthetics of a major era alive in such a fascinating manner. Three large, red-brown jasper stones are embedded into the platinum-plated barrel of the plunger-type fountain pen and envision the aura of these magnificent rooms perfectly. The barrel is also engraved with a chain pattern that echoes a formative style element of the Agate Rooms. The luxurious Special Edition of the “Catherine Palace” Pen of the Year combines 24-carat gold plating with gemstone workmanship of extraordinary refinement. The barrel is decorated with six beautifully designed jasper stone. Both editions come with an 18-carat, bicolour gold nib that is ‘run in’ by hand. An end-cap protects the rotary knob of the plunger mechanism of the plunger-type fountain pen.

Many of our Fountain Pens are run in by Hand.

Cart (0)
Total £0.00
including VAT and shipping costs
View Basket
We use cookies in order to guarantee the highest quality. If you continue browsing the site, you agree to the Data Privacy Policy.
Close